We will overcome a harsh fate, and even if we don’t have a pulse, we’ll press on! Because that is our saga!

Y’know, there are some things that just come out of nowhere. Joker from Persona 5 coming into Smash Bros, Forbidden Scrollery getting localized, and my sudden return to blogging right at the end of the year, for instance. One such thing that came out of nowhere for me is the surprise hit anime, Zombieland Saga, a collaboration between Avex pictures and Cygames (the guys who did Dragalia Lost), animated by Studio MAPPA.

Zombieland Saga opens with a young lady by the name of Sakura Minamoto getting ready for her idol audition. She’s your typical cute girl protagonist- Clumsy, somewhat-unlucky, but ready to make that all change by becoming an idol. She rushes down the stairs, gets her shoes on, and runs outside into the world, wondering what exciting adventures await her at-

…Only to get instantly hit by a truck.

Sakura awakens without her memories in a mansion full of zombies, and finds that she herself is one as well. It is then the eccentric Kotaro Tatsumi explains to Sakura what is going on. Kotaro revived seven girls to form a regional idol group to save the prefecture of Saga from fading into obscurity.

These seven girls are…
The previously mentioned Sakura Minamoto, a rather unremarkable high-school girl who died in 2008 to the tragic truck of tragedy, also known as Truck-kun.
Saki Nikaido, the rough special attack unit captain of the biker gang Dorami.
Ai Mizuno, the determined lead singer of Iron Frill who legendarily died in 2008.
Junko Konno, a soft-spoken professional idol from the 80s.
Yugiri, a lady courtesan all the way from the Meiji Restoration
Lily Hoshikawa, child actress and token mini-moe, dying in 2011.
And THE LEGENDARY TAE YAMADA, the only zombie who keeps acting like a zombie post-episode-1. 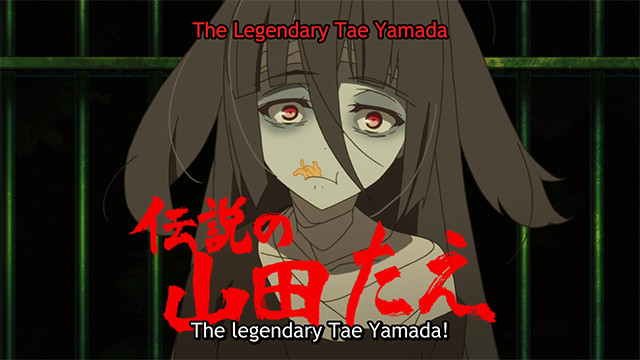 Don’t ask why Tae’s legendary. She just is!

Under the quickly-made-up name of Franchouchou, these girls (and Kotaro and his dog, Romero) will save Saga!

…Yes, that is the premise of the show. It’s as absurd as it sounds. It’s a horror-comedy with idol genre elements prominent throughout. It sounds like a recipe for disaster, right?

It is surprisingly really good. To say the least- they made me care for an idol group. And laugh at one, too.

The comedy in this series stems from its parody of the idol industry and how the girls are all living corpses. Kotaro was the one who began the comedy and continues it throughout the series. His antics and ham are wonderfully nailed by Mamoru Miyano.  There’s no explanation really given as to how the girls all were revived- Instead, Kotaro just says “it’s like the zombie movies” and calls it a day. Kotaro acts like a total jerk, but it’s the way that he acts that makes it hilarious to watch.

Of course, that isn’t the only funny thing. The girls all have quirks and personality ticks to them that makes them all stand out. Tae Yamada is especially prominent in the comedy gold. She’s the only zombie who keeps acting like one throughout the series, leading to some golden moments where she just does ridiculous stuff. In-series, she ends up being the ensemble dark-horse of the Franchouchou idol group just due to her antics. 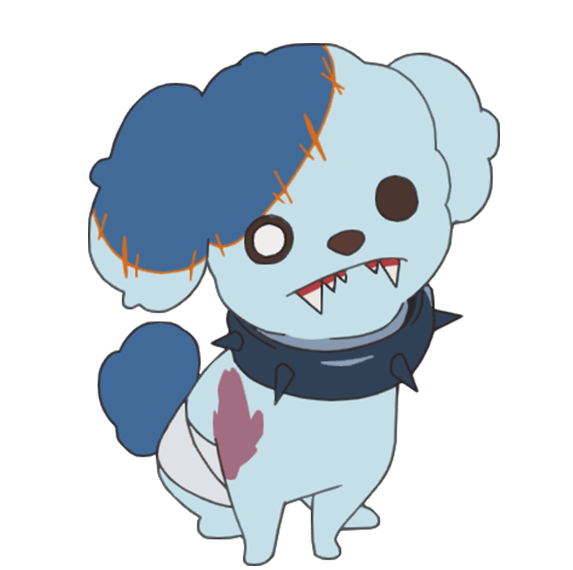 He’s a toy poodle, by the way.

As this is an idol anime, of course there are performances. And a few are 3D animated. While I’m not for or against 3D animation in anime, I will admit that several series tend to struggle with it. And sometimes it can completely break a series, from what little I know of the infamous Berserk (the newer one). Notably, the 3D animation in Zombieland Saga starts out kinda choppy when it first appears- But it improved greatly by episode 7. Some theorize that this is a satire of the random 3D animated parts of idol anime that frequently have… Mixed results. I’m not entirely sure on the theory, but if it is true, then I think it’s some pretty dang effective stylistic suck.

And with performances comes music! Despite being an idol anime, where most of the music tends to be pop, Zombieland Saga experiments a bit with what music Franchouchou does. While pop is still significant, the show also dabbles in rap and even metal. The rap in particular is actually really good. I’m not the fondest of rap (not that I hate it), but the girls somehow manage to do it!

Don’t forget the characters I just listed at the top, now! This series nails characters as well. While it’s extremely difficult for me to pick a favorite, as all of them are really endearing. Even small-part characters such as the metalheads are entertaining to see. A few characters (such as Lily and Saki) took a bit to grow on me, but by the end of the show I rooted for them nonetheless.

Image from Rorymuses.
I thought Saki was a bit of a jerk at first.

Having the zombies all come from different eras makes for a lot of interesting interactions as well. From Ai and Junko quarreling, to Yugiri and Lily’s sister-like dynamic, to just seeing Saki and Sakura rap against each other. Kotaro begins to lighten up on the girls a bit as the series goes on, giving some surprisingly good advice. Even Tae, the most zombie of the girls, develops a sense of protection towards them.

This heart made Zombieland Saga go from good to great in my eyes. The interactions between everyone made me actively root for their successes. These girls are all great- I know it’s practically tradition to call someone “best girl”, but I think the show made it so everyone was best girl. Even characters who get a bit less on development (Yugiri and Romero) still have enough character to be endearing.

In the end, I realized- They made me care for an idol group.
They tricked me into watching idol anime, and I loved it. Maybe I should give Love Live a shot after all…

To put every little thought I have on this anime is difficult- Spoilers are a difficult thing to ignore. For now, I’ll simply say that Zombieland Saga is a roller-coaster of two emotions- Smiles and tears. Absurd situations and heart-wrenching moments are what makes Zombieland Saga such a special show to me. I’ll go into more detail on the major spoilers in another post relating to this, since I don’t want to spoil anything for those unfamiliar.

Zombieland Saga is a surprising show. It came out of nowhere and captured the hearts of many. It’s often said to be the sleeper hit of 2018’s later anime season, which I certainly agree with. Considering how the show ends, I really hope Zombieland Saga gets a season 2. Yes, the stuff we have is good standalone, but there’s quite a bit of stuff that leaves a hook for a second season. Let’s just say I have high hopes and call it a day.

And forgive me for taking forever to write another blog post! Life’s been a bit stressful as of late, so I took a long break from blog posting (though I also posted a bit on YouTube). I neglected to mention this, but Zombieland Saga helped me through this stressful time. I’ll further elaborate in a later blog post pertaining to this series.

With that, see you guys then! Have a happy new year, everyone. Oh? Resolution? It’s simple- “Stop being lazy”. By that, I actually mean “start writing more often”. I really do need to write more often.